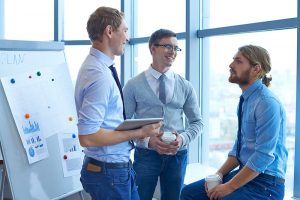 As we have explained in our article on introverted and extroverted, it is rarely true that we are entirely at the very end of the spectrum, either or introverted or on extroverted side. Of course, this may also be the case, but most of the people are at one point of the scale between the two endpoints.

However, there are personalities that cannot be clearly identified as being introverted or extroverted. They – not conflictingly – carry both personality traits, so in some cases they behave like an introvert, sometimes like an extrovert. They are the ambiverts.

In most cases they can be recognized that – similar to the extroverts -contacting others does not mean any difficulties for them: they have many friends and acquaintances and have great communication skills. Their relationships are not nurtured as thoroughly as their extroverted peers’, and they choose carefully who they initiate a conversation. In addition (just like the introverts), this type of personality requires some time spent alone and sometimes needs to be ’off’ in order to be recharged.

This duality sometimes appears to be unpredictable for other people, as the ambiverted person alternately feels him/herself well on bustling events and spending time alone.

On the other hand, it means an advantage that they are flexible in their behavior, adapt themselves neatly to the current situation and can use the benefits of both types of personality. In order to achieve a balanced personal life and a successful career path, they are able to capture the characteristics of both personality traits.

It is worth noting that in business life, not necessarily extroverted personalities are exceptionally successful. Based on research results (Adam Grant, Wharton University), most of the salespeople who are involved in the sale are ambiverts, since they are less pushy in their negotiation style than extroverts, in this way they are able to achieve purchase more easily. Their success is enhanced by listening attentively to their negotiating partner, additionally they are enthusiastic and convincing about their business opportunities.

How do I know if I am ambiverted?

If you find the bulk of the following statements true, you are certainly an ambiverted person:

As an ambiverted individual, one of the biggest challenges for you might be to decide whether to move in one (the introverted) or in the other (the extroverted) direction to make it the most effective or the most successful. If you do not make the right decision in these cases, it can cause frustration and failure.

Still, the ambiverted personalities are the best in their ability to systematize these features as well as apply them in the given situation.